In a digital age where flash-speed communication happens in the click of a mouse, the grace of a handwritten note or letter is almost just as rapidly vanishing. Emails, word processing programs, and texting have taken over.

Even in the public school system today, with increasingly demanding standards to be met and more emphasis being placed upon math and science, the importance of handwriting instruction is seen as negligible at best. While most students do have some form of handwriting instruction by third or fourth grade, still there has been a shift from the beauty of handwriting to writing efficiently. No more elegant lettering, precise loops and curves, and slant, but more of a modified printing called Italic. It is a style of handwriting that uses small “tails” to semi-connect printed letters. Yet most students, if given the choice, still prefer the computer keyboard to the pen.

So good penmanship, so important and defining of character when I, and perhaps anyone over the age of 40, was a child, is an all but lost discipline. And no longer vital to our successes in today’s business world, it is generally not featured in the course catalogs of institutions of higher learning or even adult education facilities.

Not so for the students of my town, Kingston, Tennessee, in 1857, who, according to an original document possessed by a Ms. Sandy Pierce, signed up for a commercial penmanship class. Ms. Pierce stated that the flourishes of the handlettering make the document at times difficult to read, whether the result of poor penmanship, hence the need for the course, or the extreme strokes of the Spencer method of handwriting. 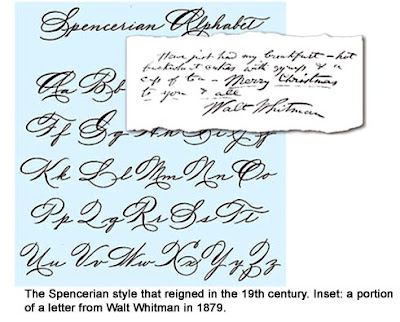 (The Spencer Method was introduced in 1848 by Platt Rogers Spencer and became the basis of how all cursive handwriting was taught in the United States for the next 50 or more years—see the Coca Cola logo for an example. In 1894 Austin Palmer developed a less ornate but equally rigid method of cursive writing that became the norm for all public school students by 1925.)

But, I digress; back to our Penmanship Class. The registration document dated March 17, 1857, showed our mid-19th century students paid $3 each for 10 two-hour lessons in commercial penmanship. 21 students were enrolled in the class taught by a “J. C. (could be H.) Walker.” (It appears whoever prepared the document for signing needed the course as well.) That seems quite a large class to me. I could understand if it were “Windows for Beginners” or “Texting 101.” It’s all relative, I suppose.

I still prefer the cursive writing I learned as a child, even though I, too, have succumbed to the speed and efficiency of the keyboard for most of my own personal communications, save an envelope or a sticky note or two. I have actually received many complements over the years on how “pretty” my handwriting was (it has somewhat degenerated, I admit). I make it a point to send handwritten “thank you” notes and birthday cards, at least, so they are more personal than an email. Once in awhile, I will send a handwritten letter as well (it is a lost art I want to cultivate). And I have saved most every handwritten letter or card of any type I have ever received, and I cherish them. (When was the last time you received an email you cherished?)

My kids learn cursive in 3rd grade, but are never forced/asked to use it after that. As a result, my 7th grader only prints.

There are still companies in Europe that send a handwriting sample to a specialist for analysis prior to hiring. ...And it never even gets to the specialist if it does not meet a cursory aesthetic inspection.

Copper plate writing used to be de rigeur for having your examiner be willing to grade an Oxon. paper. I do not know if the Oxford colleges have changed their requirements.

Most handwriting is atrocious, mine included. I, unfortunately, have an excuse. A tremor in my hand does not allow me to write legibly, and it always embarrasses me, even if everyone else has appalling penmanship too.

What a fascinating post. Thank you for finding this information for us.

As a left handed child, I was treated badly for smearing pencil on papers. My hand writing varies from good to not so good. Keyboarding is faster and email immediate, but there is nothing better than receiving a letter in the mail.

I remember learning it as an art in sixth grade, although we did start learning cursive in second. I always enjoyed playing with the look of the letters. I also enjoy looking at different styles, for example the penmanship of letters from our relatives in Germany.

I remember learning it as an art in sixth grade, although we did start learning cursive in second. I always enjoyed playing with the look of the letters. I also enjoy looking at different styles, for example the penmanship of letters from our relatives in Germany.

My handwriting has always been very poor. I once got in trouble at school for taking a magazine article yo my teacher that said those with poor handwriting often are smarter than those who write neatly. The article explained that some people's brain works faster than their hand.

I probably shouldn't have added that she had the neatest handwriting I'd ever seen.