This is a new weekly article I am going to post on my blog to--well--promote myself, and of course, my fabulous finds.

Look at these gorgeous handcrafted and mouth-blown exotic glass fish from Fitz & Floyd's "Glass Menagerie" Collection. They were very difficult to find as, I believe, they are all retired. They come in their original burgundy oval box.

They're just so pretty. You can find them in my Ebay store, The Whatsoever Shoppe, here:

Enjoy, and have a blessed day. 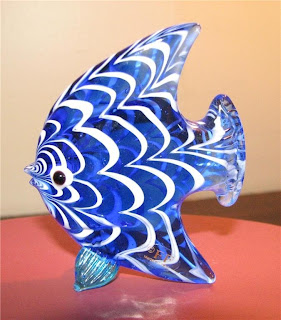 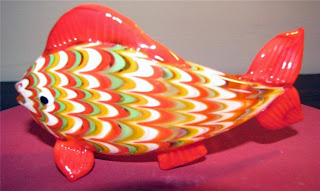 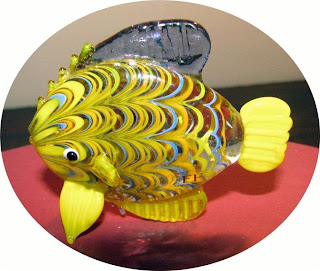 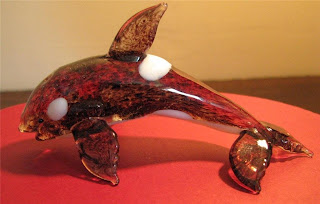 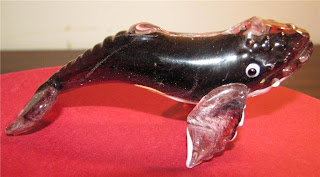 When the dog bites,
when the bee stings,
when I’m feeling sad,
I simply remember my favorite things,
and then I don’t feel so bad.

This song was written for such a day as yesterday! Alas, Julie Andrews, or rather Maria VonTrapp, I am not; so I just cried.

I woke up feeling quite ill, and the nausea lasted for at least an hour. Managing to pull myself together and walk out the door at 8:30 a.m., already half an hour late for work, I picked up my very large traveling coffee mug by the lid--which to my dismay was not screwed on--and was splattered with 20 ounces of hot coffee, as was carpet. On to change....

At work, I am currently doing a large scanning project to close out our year-end files. Shortly into the day's scanning, a jam somehow caused the scanner drivers to disappear from my computer. The restore disk didn't work--oh NO! Some time-consuming web research finally led to a download link for new drivers. So, by 11:00 a.m., I was at last able to resume my work.

At least my husband picked me up on time. Unfortunately, though, unbeknownst to us, there was a large bee (or giant killer vampire wasp) in the van. I suddenly felt a little prick on my neck, then some severe itching, but saw nothing but a little red welt. Hmmm, where did that come from? As I brushed my hand against my neck, I was struck! The big, killer, vampire wasp of a bee stung my finger and sent flames of fire through my fingertips. DH stopped the van so I could jump out, and there it was--sitting on my shoulder. Quick as a fox he brushed it off and crushed it beneath his boot. Thank Heaven for steel-toed work boots! Oh, the pain....

A little benzocaine and a few tears, and the trauma subsided. I needed a rest.

I think I'll join my cousin Cathy in Australia.

Email ThisBlogThis!Share to TwitterShare to FacebookShare to Pinterest
Labels: A Day in the Life, Comedy

I just now read the story my Uncle George wrote about "the olden days" called "How Many Remember This" (see his blog at http://gematthai.blogspot.com/2008/03/how-many-remember-this.html). I wish I'd read it sooner. It seemed to center on shopping in downtown Cincinnati and touched on the stores, the modes of transportation, where we ate, all fondly remembered by George, and many of us who read the article as well. I too remember most of the people, places, and things he mentioned, although I am quite a bit older than his daughter, Cathy, my cousin, who commented that she could recall such sites and experiences as well.

I particularly remember going downtown with grandma (Nora), and it was always an all-day excursion on the bus and back. We always went to Woolworth's and Neisner's and Shillitos. I do not remember elevators with elevator men (I assume they were all men), but I do remember what George mentioned last in his article, escalators. In those days they were very, very narrow and steep, a bit frightening to a little girl who thought she might get caught if she didn't jump off just right!

We always ate at the lunch counter at Woolworth's, one thing I dearly miss and recall very distinctly. We always sat in a booth as well. (I think Grandma was too short to sit on the bar stool.) I also remember the basement; we always went there as it was called the "bargain basement." Since Woolworth's and other such stores in those days were called "dime stores," I don't know how much more of a bargain there could possibly have been found there. I suppose they were akin to today's "dollar stores."

Stroll down Memory Lane for more history and pictures of Woolworth's at this blog:

Cathy, I, too, remember the candy counter: we often were treated with candy necklaces--little candy "jewels" on elastic string--or candy strips--those wide pieces of paper with about 4 "dots" of colored candies neatly spaced in row upon row; or my brother's favorite, tiny wax "Coke" bottles, 4 to a tiny carton, with juice inside. One just had to bite off the top--and spit it out :) -- to take a drink. And what about the candy "cigarettes?" Sticks of pure sugar with a red-painted tip; we surely looked grown-up with those hanging out of our mouths!

Get it all here at Nostalgic Candy.com http://www.nostalgiccandy.com/index.asp 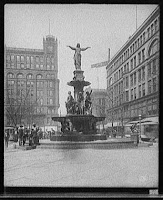 I was always most impressed, though, by the Tyler Davidson Fountain in Fountain Square. I know it's changed so much over the years, both the fountain and The Square, but it always stood out as a most amazing site! (Photo courtesy of HelloCincinnati.com)

conditioning today?), and the windows were always open in the summer. They only went down half-way as I recall; perhaps a safety feature? The buses were loud and hot and crowded, and they stopped at every block. We couldn't wait to pull the string when we were nearing our stop and always bickered over whose turn it was.

I still can't really say, "Those were the days," but there will always remain some fond memories. Thanks for the story, Uncle George!