Well, here I am "retired," 20 years too late, and now that I could do whatever I want with no time schedule, I find there is nothing to do, yet still so much to do. If this were 20 years ago, my dreams would have come true. I would be a stay-at-home mom, I would be there for my two young sons, they would be the priority of my life as it should be, I would see their first steps, hear their first words, watch their first everythings. Instead, I missed it all, left it to the hands and hearts and eyes and ears of strangers. Not because I wanted to; not because I was out there climbing some insignificant corporate ladder; not because I was trying to keep up with the Joneses, but because I had to. My circumstances forced me to.

So now, here I am, semi-retired, no schedule, no deadlines, no walls, no bosses, but it's all too little, too late. Nevertheless, I'll log my days, my hours, my unevents; maybe I'll see a pattern, maybe something good will develop, even though nothing could ever take the place of, make up for, all the time I've missed and all the time my boys have missed with me. I'll never get over it, I'll never get it back, I'll never replace it, I'll never forgive it, myself, my circumstances.

Most people look forward to retirement. Perhaps they don't have regrets. Perhaps they feel as though they've done their part, they've earned it. Perhaps retirement means more when you can move to Boca Raton, take a cruise, buy a condo, fly to Paris, I don't know. I still have too much to figure out. Too many things I wish I'd done differently, too many years I wish I could rewind and relive.

There's a timeless poem that reminds us "babies don't keep." I heard it many years ago, and it's been the lament of my soul since my children were small. The mother in this poem is not worried about the appearance of her home, her undone dishes, her unmade bed, laundry half-done; she has more important tasks at hand. She knows that in an instant her children will be gone--her boys, men; her daughters, grown. Her job is eternal, and her tenure fleeting.

Oh, how my heart ached every day I had to go out to some office somewhere and leave my children behind. At night, I cried; not from the sheer exhaustion of it all, but because I had to do it over again the next day, drop my little boys off at some daycare center at what seemed like first light, not being able to pick them up again until dusk. It didn't seem fair.

They grew so fast. Now they are men, gone their separate ways, and the days I missed and the days they missed cannot be recovered. All the jobs I've ever had sooner or later went on without me, I never got richer, or more important, or more renowned, never got a bigger house, finer things, yet it's 20 years later and I'm left wondering where all the time went and what it was all for.

Because I had to work, I had no choice. I wonder.

Mother, oh Mother, come shake out your cloth
empty the dustpan, poison the moth,
hang out the washing and butter the bread,
sew on a button and make up a bed.
Where is the mother whose house is so shocking?
She's up in the nursery, blissfully rocking.

Oh, I've grown shiftless as Little Boy Blue
(lullaby, rockaby, lullaby loo).
Dishes are waiting and bills are past due
(pat-a-cake, darling, and peek, peekaboo).
The shopping's not done and there's nothing for stew
and out in the yard there's a hullabaloo
but I'm playing Kanga and this is my Roo.
Look! Aren't her eyes the most wonderful hue?
(lullaby, rockaby, lullaby loo).

The cleaning and scrubbing will wait till tomorrow,
for children grow up, as I've learned to my sorrow.
So quiet down, cobwebs. Dust go to sleep.
I'm rocking my baby and babies don't keep.
by Ruth Hulburt Hamilton
Have a blessed day.
Posted by Unknown at 11:59 PM 1 comment: 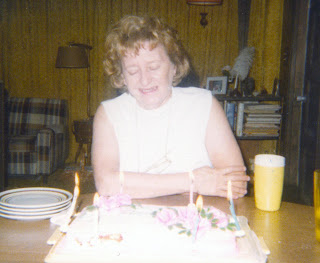 Just realized that my cousin Cathy submitted a new comment on a previous blog entry of mine which I wrote this past birthday. Noticing that I had referred to my mother as Theresa Lillian Matthai, Cathy stated she never knew her name was Theresa and asked why she had always been called "Lilly." My Uncle George, Cathy's father and my mother's brother, had also mentioned to me sometime back that he would like to see me write more about my mother since he felt he hardly knew her, at least in those early years of our lives as he was away in the Navy and she was so much older than he. It also occurred to me that perhaps Uncle George did not know my mother's first name was actually Theresa, so let me explain.

Indeed, mom had always been called Lil or Lilly, and for most of her life believed her first name to be Lillian and her middle name to be Theresa. That is what she had always been told and, of course, had no reason to doubt it. The story went, as she related it, that my grandmother loved the name "Lillian," but my grandfather, Karl, wanted mom to be named after his mother, Teresa, still in Germany. They couldn't agree so, mom was told, settled on the name "Lillian Theresa" (spelled with the "h").
Mom had always hated the name "Lillian;" and, in fact, while growing up and particularly in high school and her early adult years, refused to be called Lillian at all. She went by her "middle" name and all of her friends called her "Terry," short for Theresa, but not nearly as pretty. Somewhere along the way, she dropped the "Terry," and went back to Lillian, as I do not ever remember my father, grandmother, or aunt or uncle calling her anything but Lil or Lilly. Perhaps she outgrew the novelty of it all. (In my youth, I changed the spelling of my name from R-o-b-i-n to R-o-b-y-n because I thought it was cuter.....but, I digress.)
So, mom was Lillian to most of us and certainly to Grandma. Here's the twist: After Grandma passed away in 1977, mom found her own original birth certifiate among other of Grandma's important papers and personal effects. Apparently, mom had never had occasion to look at her birth certificate before because she was certainly surprised to find that her name was listed as "Theresa Lillian Matthai" on the birth certificate, not vice versa. It seems Grandpa Karl had had his way after all! Mom was a bit perturbed to say the least, as she spent all those years remaking herself into "Terry" when she was "Terry" all along.
I personally can't picture her as "Terry," or "Theresa" for that matter. She just seems like a Lillian to me. I miss her.
As an aside....did you know that Aunt Loraine was always adamant that her name was misspelled as well? I believe her name is "Lorraine Roselle Matthai." She always insisted that "Loraine" should be spelled "Lorain" (one (1) "r;" no "e"), but to compromise, she kept the "e" at the end of her name, although she refused to keep the two (2) "r's." Uncle George, did you happen to find HER birth certificate among all the paperwork you recently had to sort through?????????
Have a blessed day.