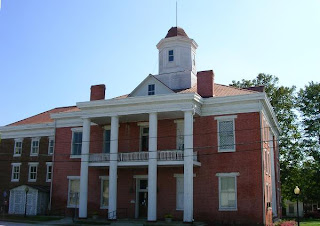 Kingston is home to one of the only 7 remaining antebellum courthouses in the State of Tennessee today. Affectionately referred to as the “Old Roane County Courthouse,” it is listed in the National Register of Historic Places and remained an active courthouse until it was replaced by the newer and current county courthouse in 1974. It is the oldest building in Kingston and comprises a downtown city square.

Built between 1854-1855 using native lumber and bricks made on-site by slaves, the original structure was raised using no nails. It served as a hospital during the Civil War and was used by both Union and Confederate soldiers. Still today, one can see graffiti written on its walls by the soldiers hospitalized there. For decades it was the center for dances, picnics, and courtroom trials, as well as hangings on the courthouse lawn. (There is a rumor that gallows were built inside the courthouse for indoor hangings. The gallows are there, but for decoration only; there were no indoor hangings.)

The courthouse has had many renovations over the course of the past 150 years, from having had a new roof put on in 1882 to the two-story rear addition that was constructed between 1936-1937. Now owned by the Roane County Heritage Commission, it has been undergoing a total reformation for some time. It houses the Roane County Museum of History and Art, which has preserved much of the history of Roane County’s early settlers, and the Roane County Archives Library.
Two of the rooms on the first floor of the courthouse house museum exhibits dating back to prehistoric American Indian times. Stone bowl fragments, grooved axes, and photographs of excavations reveal what Indian life may have been like in our area thousands of years ago. There are two large display cases devoted to Civil War artifacts, when Kingston was occupied by both Northern and Southern armies. Other displays exhibit mementos and historical photos documenting the founding and history of Kingston and other Roane County cities. The largely German heritage of Roane County is illustrated through black-and-white photos depicting everyday life of its 19th century citizens. Visitors can continue their walk through history from the turn of the century (20th) through WWII.
The Archives Library contains a large collection of original court papers such as marriage certificates and land records dating back to 1802, so rare in the South where so many original documents were lost during the Civil War and other causes, such as fire. (Amazingly, the old Roane County Courthouse has never experienced a fire.) As a result, the Archives have become very well known and draw genealogists and researchers from all over the world.
Outside in front of the courthouse stands the commemorative 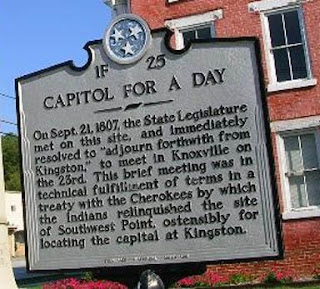 plaque denoting Kingston’s somewhat jaded distinction of having been the State capitol for one day on September 21, 1807. In a bit of political hokey-pokey, the City of Kingston entered into an agreement with the Cherokee Nation to become the capitol of Tennessee in exchange for its ceding Indian land that is now known as Roane County. Kingston honored the agreement on that date, but the Assembly resumed meeting in Knoxville the following day, where the capitol remained until 1926 when it was moved to Nashville.
Only the first floor of the old courthouse is used today due to current fire codes. The new renovations will include sprinkler and fire alarm systems so the upper two floors can be used as well. It will include a transportation museum showcasing Kingston’s importance as a crossroads of highway and river transportation during the westward expansion as people passed through its gates headed to Memphis and Arkansas. The museum will display historic photographs that document steamboat, early rail, and automobile travel in Tennessee. It is even expected to include the whistle from the Joe Wheeler, the last steamboat to make the regular run from Kingston to Chattanooga. The building will also have a visitor’s center and an elevator.
While the renovations and modern amenities to the courthouse will make it safer and more accessible, they will for me diminish some of its charm. There’s a wonder about it now as one walks the small rooms and narrow hallways, stepping into the past and experiencing the history of my home town first hand. However, merging old with new is the price for preserving history. The Old Roane County Courthouse and the history it continues to protect have withstood the tests of time, war, natural disasters, and the threat to turn it all into a parking lot.
Posted by Unknown at 10:41 AM

What a beautiful courthouse!

That's very interesting that it was used as a hospital by both Union and Confederate soldiers.

Thanks for sharing the history of this gorgeous bit of architecture.

I'd love to be able to search those archives.

Fascinating! Wouldn't you just love to see some of those old papers with your ancestors' names on them?!

I came by to see your MTM for this week, and then realised that you must be in the same bind as Junosmom.

I wish you both all the best and hope it thaws swiftly and safely for yourselves and your properties.

I hope Junosmom's chickens and horses and cats and dogs are all doing OK.

Chris, thanks for checking in on my blog! My MTM post is up now, delayed due to winter weather and power outage, though not nearly as dramatic as junosmom and others experienced.