Chatty Cathy and Her BFF's 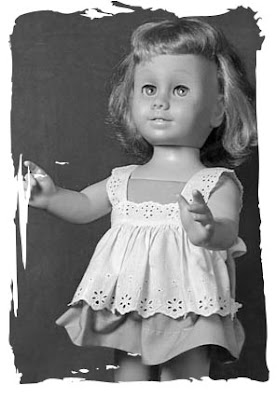 The Knoxville News Sentinel had an article last weekend about a doll collectors' meeting in the Knoxville area. It featured one woman's 400 piece collection of original restored Chatty Cathy dolls, one of the most popular favorite dolls of little girls in the 1960's. First produced by Mattel in 1959, she was the first "talking" toy and could repeat phrases such as "I want a cookie," and "Let's have a party" by pulling a string at the base of her neck. And "she's cute," quoted the article.

I remember my Chatty Cathy, and my older sister's, as we were always apt to get the same toys for Christmas, even though we were three years apart in age. She took much better care of hers than did I, as she was a much girlier girl than I. I seem to recall coloring Cathy's eyelids black and perhaps cutting off all of her hair. Maybe that's why I stopped getting dolls for Christmas. It led to much jealousy the year my sister got a lifesize (for an 8-year-old) bride doll, and I got some floppy stuffed baby doll that didn't do anything. 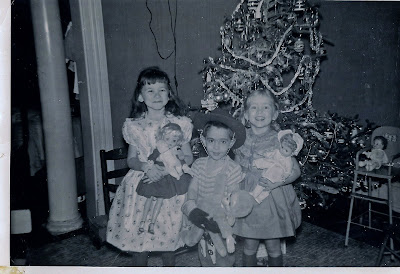 I'm pretty sure we both had a pre-Cathy Betsy Wetsy doll as well. Betsy ... you guessed it: she peed. Well, thankfully it was simulated pee, water from a miniature plastic baby bottle squeezed into a little hole in her mouth and coming out a little hole you know where. Of course, and also thankfully, they weren't allowed to make anatomically correct dolls when we were children. Nor would the baby dolls of our childhoods hardly be considered politically correct today: mostly fair-skinned with rarely an ethnic variety among them, and appropriate for teaching little girls how to become above all else dutiful and doting mothers, feeding, bathing, and changing their babies, and if the girl were lucky, pushing them along in little baby buggies (think Margaret of Dennis the Menace fame).

Could be part of the uproar over the newly emerging Barbie doll was that it threatened this idyllic role training of little girls in an era when women were beginning to have louder voices in the world. Inspired by Marilyn Monore with her curvacious figure pared down to more respectable proportions, the Barbie doll opened the eyes of young girls everywhere to the world of fashion, travel, and careers. I remember having had three Barbie dolls in my life (all given up by the age of 10): Barbie, her bff Midge, and Barbie’s sister, Skipper, all of whom had clothes, shoes, and accessories galore. My sister had, I think, every Barbie-clan doll made from the time they first appeared in the stores in 1960 until late into her teenage years. She finally gave them away, perfectly preserved, to a younger neighbor girl. My Barbies, on the other hand, lost limbs, hair, and all their clothes before they finally disappeared into the night. Like I said, I wasn't a girly girl.

I hope that decades from now today's little girls will look back just as fondly on their Baby Alive and Bratz dolls of this era, even if they do color their eyelids and cut off all their hair.
Posted by Unknown at 12:02 AM

I enjoyed the reminiscing... don't tell anyone... but at 57 I still have my Chatty Cathy and Barbies in their boxes, up in my closet. Lol! They just sit on the shelf undisturbed, but I just can't make myself get rid of them. I guess some of us never grow up, totally.