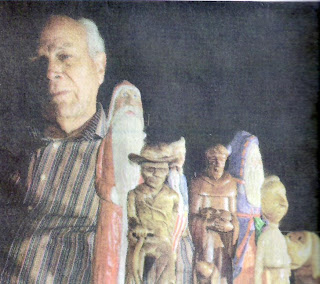 Kingston is home to a local artisan. Don McMurray, an 82-year-old Kingston native, has a passion for carving wood. For 30 years he has been turning and shaping and carving pieces of wood into beautiful and intricate figurines and other pieces of art.

But he’s never sold a single piece, not because they weren’t marketable; he’s just never been inclined to sell his work. Don’s motto is, “If you charge a dollar, you lose a friend.” Still his pieces have become very popular in the community where they have been displayed over the years or given as gifts to friends and family.

Fond of carving caricatures, Don won a blue ribbon at the Tennessee Valley Fair in the early-90’s for a carving he dubbed “Knicker Knockers.” It was group of 4 golfers with movable heads wearing polos and golf pants and standing near their golf clubs. 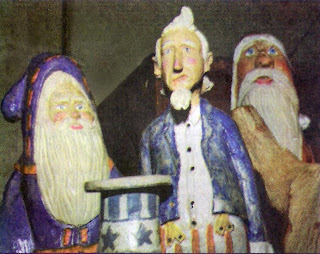 One of his more popular carvings are those of Santas in all shapes and sizes and made from all different types of wood. When a local hardware store in Kingston burned some years ago, Don obtained some of the charred wood from the 200-year-old building and used it to make one style of his Santas. Those Santas aren’t painted, and bits of the charred wood can be seen on the statues. Don gave two of those Santa figurines to the Browder family (the founders of the hardware store that burned) and donated one to his church’s auction, bringing $340.

Once while being treated for heart problems, he met a lady in cardiology for whom he carved several wooden name tags that she could pin to herself. She was thrilled with the gift, and now that the woman, nicknamed “Shorty,” has passed away, McMurray muses that at least one of his carvings has gone to heaven. 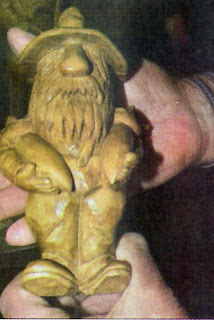 While McMurray enjoys carving his more lighthearted pieces, he says he has more respect for his more serious carvings, such as the nativity which took him more than two years to complete. (It’s the only piece he has ever tracked the completion time on.) Starting with the Baby Jesus’ face, he was so dissatisfied with the outcome, he started over on the other end of the piece of wood. Always beginning at the face, which McMurray says is the hardest part, he laughs about it now and calls it “twin Jesuses.”

Most of his work can still be found displayed throughout his home, pieces such as ducks and Indian pieces, and a piece bearing the Kingston logo. The rest are stored in five boxes in the basement which is where his workshop is also located.

The craft that he loves comes natural to him. He has been doing woodwork all of his life, and a 4-poster bed in his home testifies to his skill and the quality of his work. He says he took up the carving hobby after he became a card-carrying member of the Smoky Mountain Wood Carvers group, and he hasn’t looked back since. The culmination of his years of work will be a public exhibit at the Kingston Community Center on March 9th.

And although he has slowed down a little over the years, saying he’s lost a little of the feeling and a little of the attitude, he’ll return to his work table often to finish those undone pieces. And sometimes, when the wood calls to him, he’ll even start a new one.

Photos courtesy David Doonan/Roane Newspapers
Posted by Unknown at 5:37 AM

Fascinating. I've tried a bit of wood carving but with absolutely no success.

Don's pieces are extraordinary. He brings all of the experiences of his life to them with amazing success.

Even if he doesn't want to sell, he ought to have an art show! Wouldn't it be neat to see them all? Perhaps it would be too much effort for him.