Saturday was such a beautiful pre-spring day, with mild temperatures reaching 70 and clear blue skies, one might surely turn her thoughts toward visiting a local amusement park. I, however, had no such intentions. Imagine my surprise, then, when I found myself not once, but twice, a participant in an unintentional game of bumper cars.

The thing about bumper cars is just when you think you have a clear space to break away, the car behind you abruptly changes direction and lunges into your personal space. So it was with the silver El Dorado with the tow hitch that I watched pull securely into his parking space directly opposite me before I backed out of mine.

Now I will sheepishly admit that I am not the most alert driver, but I was watching where I was going. Clearly through my rear view mirror, I saw the El Dorado safely parked, lights off, as I slowly moved backward in my own vehicle. Then, without warning, just like that annoying little bumper car that comes from out of nowhere and rams you when you least expect it, thud!

Seems the driver didn’t see me back up when he decided he had pulled in at an angle and needed to back up himself and re-park. Well, truth be told, maybe I didn’t see him all that clearly either, and it was a rather minor bump, although it left a 3” gouge in my rear bumper. The tow hitch was not harmed. It’s still amazing to me how all 50 cars in a parking lot the size of a small city find it necessary to park in the first 3 rows.

Business concluded, and having decided to continue to enjoy the gorgeous pre-spring day, I drove merrily on my way with a few more stops left before it was time to 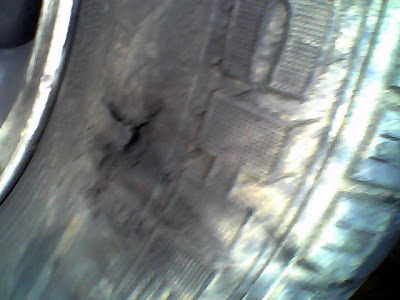 pick up my son, Aaron, at work. Carefree, on our way home at last, we made one last stop at the convenience store for gas and a paper. While I darted into the store, Aaron pulled between the car at the pump and the curb to park and wait for me. Then, it happened again; not a thud this time, but a pop. It must have been a little too tight a squeeze, for the right front tire scraped the curb just where its metal frame and concrete were broken and left exposed, jagged and rough. A non-repairable hole in the tire, oh my! And no spare.

AAA to the rescue, but at my expense for the new tire, and possibly the tow since the distance to the local StuffMart Tire Shop (the only retailer open at 6:55 p.m. on a Saturday night in East Tennessee, imagine!) may have been more than my coverage allowed. We’ll see. Fortunately, a call to the RegionalConvenienceStoreChainEmergencyManagementNumber promised retribution if I would call the office on Monday and report the claim.

Note to self: No more wild rides.

Myhusbandthetruckdriver hit Chicago Saturday morning where he waits to pick up his next load. All weekend in the terminal is not so bad; at least they have a TV in the trucker lounge; it has better reception (usually) than the one in the truck. Monday morning he is off to Oklahoma; hopefully home next weekend.

Email ThisBlogThis!Share to TwitterShare to FacebookShare to Pinterest
Labels: A Day in the Life, Challenges, MyHusbandTheTruckDriver

Ah, that's terrible that such a beautiful day can hold unpleasant surprises. Life is like that sometimes. How did you know about the convenience store emergency retribution thing?