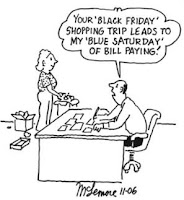 Today is Friday, November 28, 2008 - Many call it "Black Friday," the day after Thanksgiving. This causes one to wonder about the origination of the term "Black Friday," and why this particular day of all other days would be referred to as "Black Friday." (Of course, many don't care, but I was curious, so I did just the teensiest bit of research, and here's what I found:)

The earliest reference to "Black Friday" seems to have been precipitated by a failed attempt in 1869 to corner the gold market by gold speculators Jay Gould and James Fist, among others including President Grant's brother-in-law, Abel Rathbone Corbin. When government gold was released for sale to break up this conspiracy to drive the gold market by a few individuals, the premium plummeted within minutes and immediately ruined thousands of investors, including Corbin. (Isn't it interesting that Gould and Fist still managed to profit sizeably -- the rich get richer.) The date was Friday, September 24th, 1869. Since then, several other days of financial panic or any financial confusion or upheaval have been referred to as "black;" i.e., black Friday, black Monday, black Tuesday, etc.

A more interesting but debatable story involves a retail salesman by the name of Laurence H. Black who worked in the men's department of a large department store called Osberger’s Department Store. For over 30 years, he served the public proudly and with class, always wearing a black suit and a red carnation. He became well-known and well-respected over the years, and was often called upon to train new sellers in other store locations. Always the first to arrive and the last to leave, Mr. Black became a veritable fixture at Osberger's. But on November 27, 1964, the day after Thanksgiving, Mr. Black dropped dead of a heart attack. Mr. Osberger closed the store the next day (one day only).

The story goes that the following year, the day after Thanksgiving, all the employees at all Osberger's stores wore black suits or dresses with a single red carnation in honor of Mr. Black. Many other retailers supposedly followed suit, and so the day after Thanksgiving became known as "Black Friday." (By the way, it seems about fifteen mergers and acquisitions later, Osberger's becomes Macy's -- you've heard of them!)

Of course, there are now many more contemporary references to "Black Friday." I have heard that it is the busiest day of all for plumbers nationwide who receive the most service calls out of the entire year. The term "Black Friday" is also said to have originated in Philadelphia in reference to the heavy traffic on that day (traffic is always heavy in Philadelphia!)

But most Americans today now understand "Black Friday" to be the Friday after Thanksgiving, today! The official start of the Christmas shopping season. The busiest retail shopping day of the year. The day when retailers hope to see an drastic upswing in their financial picture, putting them "in the black" to close-out the year. (Before the days of Peachtree and QuickBooks, accountants used red and black ink on paper to keep their books--being "in the black" meant showing a profit.) The day when retailers do all sorts of magic tricks to manipulate consumers into their stores: price slashes, door-buster sales, midnight madness, free gift cards, coupons for percentages off, two-for-ones, media coverage, ads, ads, and more ads, and lots of pretty pictures for precocious and wide-eyed boys and girls to look at and dream about and pester parents about until they buy, Buy, BUY. Why else would someone line up in front of Circuit City at 4:00 p.m. on Thursday for a sale that starts at 4:00 a.m. on Friday? Why would someone have a sale at 4:00 a.m. on Friday, or go to a sale at 4:00 a.m. on Friday?

In essence, "Black Friday" is a day for retailers to make money and the general population to go bankrupt (fiscally and intellectually). I like the part about "being the black," though; so for me, I think I'll stay home today and keep my own books in the black.

Happy black Friday, one and all.

Have a blessed day!
Posted by Unknown at 8:46 AM

I sooooo dislike shopping in crowds, I'll stay home, too.