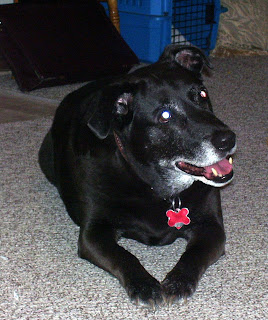 Tar has come to stay with us. He is my aunt and uncle's dog, but circumstances have caused him to relocate. My dear uncle passed away not too long ago, and my aunt's ill health for some months past had made it impossible for her to care for Tar any longer prior to her own recent home-going. One doesn't just abandon family, so we brought Tar home.

Tar is actually Tar, Jr., Tar for short. Like Tar, Sr. (my aunt and uncle's previous canine companion, though unrelated) he is a black lab mix. He is very gentle (generally) and user-friendly, although in his old age (just turned 12) he is quite set in his ways. For instance, he is so accustomed to having "bites" of people food at every meal, one can hardly deny him. He will steadfastly stand at the edge of the table very patiently waiting. He knows not to beg until he hears the words "Want a bite?" at which time he nearly leaps for whatever morsel one might be dangling between finger and thumb. Though he eats dry dog food, it must be fresh. He will not eat leftover food; indeed, he would apparently rather starve.
Tar is most content these days to lie down and rest, but does like to be near one of his people. Unless he is sound asleep, he will follow his people hither and thither, then again lie down at their feet. He enjoys a good rub and a scratch behind the ears, but if no one is near, he will happily scr 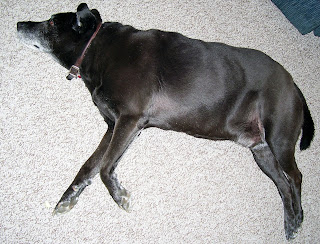 atch his own back by rolling around on the carpet, all 4 paws in the air, growling with glee all the while! A little treat will warrant a "shake-a-paw," and he loves to go outside whenever the door is opened (though he'll quickly come back in).
After having lived all but the most recent 6 months of his life with my very sedentary aunt and uncle and seldom ever encountering a human of the toddler persuasion, it must have been quite a shock to him when Anna (my 2-year-old niece) came to stay with us. He was bit finicky and jittery when she first arrived, never having had to deal with anything that moved as quickly as a 2-year-old. Soon, though, he became her protector and guardian as Labs are apt to do. Anna can now play with him, comb his tail, an 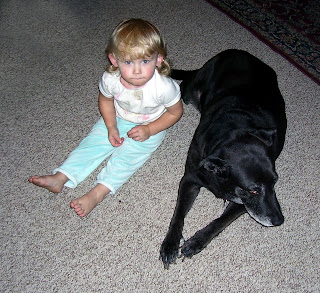 d lie on his belly without his so much as flinching. She once even stepped on him in her efforts to climb over the girth of his midsection, yet he took it all in stride.
Still, Tar is quick to come to Anna's rescue at the slightest risk of danger. He has been known to intervene with a snarling low growl as her father tickles her. Apparently, Tar views this as a confrontation and is prepared to attack; Anna's father (my brother) views this as an opportunity to instigate hilarious trouble. His sense of humor is rather wry. 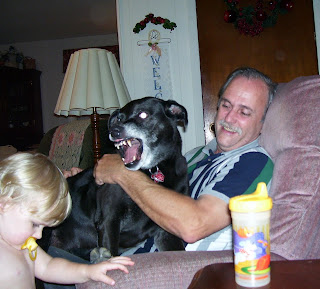 We do feel very safe with Tar around, however. The bare hint of an unfamiliar presence near our property will set Tar in ready mode. Again, the low snarling growl, as if to say, "Beware!" followed by very grown-up barking until whatever predator that threated us has turned aw 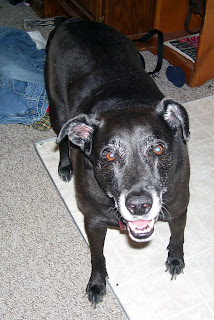 ay.
There must still be some puppy in Tar somewhere. He loves to play and has a whole dishpan full of toys of all sorts, balls, pull toys, rags, and other rubbery things. Tug-of-War is surely his favorite game. It makes him look quite vicious as he growls and snarls and drools, but we all know he is really very gentle and doesn't have a chance of winning. It is quite funny to see this 80-pound dog sitting on my brother's lap and laughing, though! 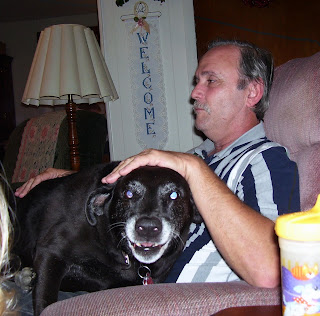 Yes, Tar is a good old dog, and we're glad we adopted him. He's all the more precious to us now that Aunt Loraine has gone home to be with the Lord. We hope Tar will be with us for many more years but he may follow her soon, as Labs tend to have a shorter lifespan than some other dog breeds. When he does, though, we know Aunt Loraine will be thrilled to see "her baby" again. 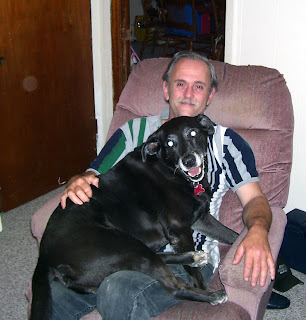 Have a blessed day!
Posted by Unknown at 8:03 PM